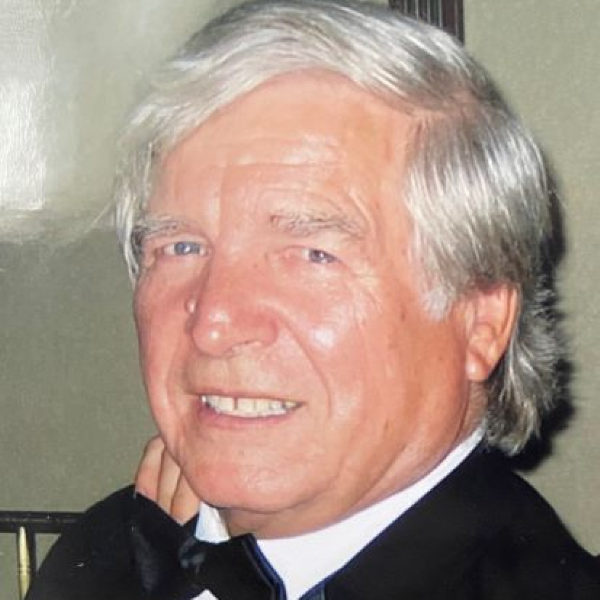 Richard L. Hessert, 87, of Rumson, New Jersey, passed away peacefully surrounded by family, on the morning of March 30th 2021, after a lengthy battle with dementia and later, COVID. Dick was born in Duboistown, Pennsylvania on September 29, 1933 to father George L. Hessert Sr. and mother Elizabeth (Denius) Hessert-Heilman. The youngest of three sons, Dick graduated from South Williamsport High School, Williamsport, PA, where he played all-state football. He was drafted into the U.S. Army after graduation and was stationed in Berlin, Germany during the Korean War as occupational forces as a combat engineer. His assignment was to wire bridges between East and West Berlin with explosives, should the Soviets attempt any aggression. After his military service, and on a 50 cent bet from a friend, Dick applied and was admitted to Lycoming College where he earned his Bachelor of Science Degree in mathematics. Soon after, his lifelong friend and childhood neighbor, Robert Asby, recommended Dick at Geisinger Medical Center to setup one of the first artificial kidney labs in the country . Dick was sent to the University of Washington, Seattle, for extensive training in Dialysis. Dick was later given the opportunity to relocate to Brooklyn, NY and setup a new artificial kidney lab at Kings County Hospital, and later Downstate Medical Center, where he setup and ran both units. Dick became a pioneer in the Hemodialysis field, helping open many dialysis clinics across the country, adapting reverse osmosis machines to work with patients on hemodialysis, and helping co-invent the suitcase kidney machine, just to name a few accomplishments. Dick was later given the title of associate professor of Medicine by Dr. Eli A. Friedman at Downstate Medical Center. Dick eventually went into business operating Richmond Dialysis Associates and Brooklyn Home Dialysis Training Center, having the lowest mortality rates in the country among dialysis patients with his acute attention to patient care. Dick was known for his incredibly hard work ethic, generosity and intelligence. His favorite book was Atlas Shrugged, his favorite food, peanut butter, his favorite ice cream, butter pecan. Dick was preceded in death by his parents and by his brothers, George Jr. and James. He is survived by his ex-wife, Elizabeth Ann, and current wife of 48 years, Lesley Jane; children Monica Hessert; Kathleen Creveling; Richard A. Hessert(first marriage); Kenneth Hessert; Jeffrey Hessert; Melinda Tucci; and Whitney Hessert(current marriage); 12 grandchildren and 1 great grandchild. Dick’s family has chosen not to hold a wake or funeral ceremony during COVID, a military ceremony will be held on a future date to be determined. In lieu of flowers, donations can be made in Dick’s name to the Wounded Warrior Project via http://support.woundedwarriorproject.org or the Alzheimer's association at: https://act.alz.org/site/Donation