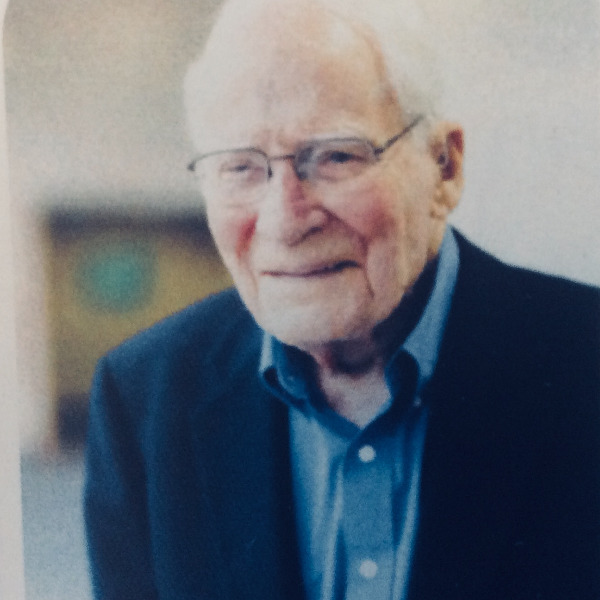 Arthur Matthew Johnsen, Jr., passed away on August 20, 2018, in Newton, New Jersey. He was born March 12, 1918, in Chicago to Arthur and Ethel Johnsen. He was educated in Chicago public schools, and then enrolled in the School of Engineering at the University of Cincinnati. After graduating with a degree in metallurgy he was employed at Armco Steel in Middletown, Ohio. He was a captain in the U.S. Army and was stationed at Picatinny Arsenal in New Jersey during World War II. In New Jersey he met the first love of his life, Janice Larson, whom he married in 1944. After the war they returned to Middletown to continue his career at Armco. In addition to his own research, he served as director of the research laboratory, retiring from Armco in 1980. Art and Janice’s marriage was blessed with four children: Arthur, Barbara, John, and Jane. Janice passed away in 1972. For ten years Art lived as a widower, a time that ended when he married the second love of his life, Sue Crane Helsinger. Sue and Art enjoyed the life of their blended family. Art was active in his church, Resurrection Lutheran Church in Lebanon, Ohio. He was also active with the Countryside YMCA, United Way, Big Brothers and Sisters, and the Warren County Area Progress Council, to name just a few of the many civic organizations he was devoted to. Art had a great sense of humor and family and friends enjoyed his many colorful stories. He loved gardening, camping, and hiking. An Eagle Scout, he was a devoted conservationist. He avidly played golf well into his 90s. He was a voracious reader. Art was an earnest Christian who, in his actions and outlook, exemplified the finest principles of the faith. He was a loving father, husband, grandfather, friend, and citizen. Family and friends were privileged to celebrate his life on the occasion of his 100th birthday last March. He leaves his wife Sue, daughter Barbara Olsen, son John (Heather) Johnsen, daughter-in-law Janet Johnsen, and son-in-law Donald Renner; stepsons Jeff (Janice) Helsinger and Jim (Suzanne) Helsinger; grandchildren Kristen (Paul) Rossi, Erik Olsen, Margaret (Andrew) Canniff, Eleanore Johnsen, and Charles Johnsen; step-grandchildren Tina Helsinger, Amy Smith, Rose Helsinger, James Helsinger, Bryce Hudgel, Dwayne Hudgel, Stephanie Ethridge, and Whitney Wood; great-grandchildren Andrew Rossi, Evan Rossi, and Matthew Canniff; nine step-great-grandchildren; nieces Carol Cromer, Barbara (Denis) McLaughlin, and Ann Marie Stager; nephew Daniel (Eileen) Howard; plus numerous cousins and other relatives. He was predeceased by his first wife Janice, his sister Lois Cromer, his sister-in-law Sara Howard, his son Arthur, his daughter Jane, and his stepson David Helsinger. A memorial service will be held on Saturday, September 1, 2018 at 11:00 at Resurrection Lutheran Church, 1270 North Broadway, Lebanon, Ohio. Visitation will be held at the church from 9:00 to 11:00. In lieu of flowers please consider donations to his church